Mazooma Interactive Games, also known by its acronym MIG, has been running in the gambling business since 1997. Like most other gaming software developers that have been around for so long, all started in the brick and mortar industry where it gained familiarity with the delivery of gaming services. This foundation paid off when the company finally decided to join the web industry where it has since evolved to become among the most well-established names on the platform. 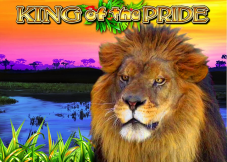 King Of The Pride

Even though this provider is not considered a household name similar to other companies the likes of Playtech and NetEnt, punters that have come across its game have left numerous positive reviews. The provider focuses on innovation more than any other element in game development, which is a big plus despite the small size of their portfolio in comparison to those of other leading names. The thriving nature of Mazooma caught the attention of Novomatic Group of Companies not long after its move online, and it has since been acquired to operate under the giant firm’s umbrella; this has only served to take the software developer to new heights of success and place a good number of its slots in global popularity lists.

Even with Mazooma’s acquisition by Novomatic, the game provider still forges partnerships with other thriving names in the business to widen its scope of service provision. Some of these companies include Dragonfish, OpenBet, and GTS. In the casino realm, Sky Vegas and BetVictor are some of the leading gambling destinations that depend on the company for game provision.

The online casino realm hosts a variety of the game categories, and Mazooma is mainly invested in the growth of one – slot games. Since their inception in the eighteenth century, slots have remained the most played games, which has led to numerous software firms focusing on their development. As of the moment, Mazooma slots counts at over one hundred options. Considering the time that this software company has been in operation, this number is small. Nonetheless, their select development ranks them as some of the best.

During the creation of their games, Mazooma takes time on their quality than quantity, which is among the main factors that have helped it withstand the test of time. Each of the games is distinct from the other in terms of layout, imagery, and animations. Nevertheless, like is the case with most other software providers, some features can be spotted in nearly all of them, and they include:

Themes have grown to become an essential part of online slots since they define the storyline that unfolds gameplay. Mazooma has followed suit with the trend and has explored a wide range of them including the wild west, board games, adventure, and popular children games. One of the best-doing slots by the developer is dubbed Willy Wonga Cash Factory, which is a parody of the famous 1971 film Willy Wonka and the Chocolate Factory.

Seeing that the company has been around for quite some time, it is no surprise that it has an ample selection of three reeled slots from back in the day. These sets are availed to date. However, the firm has since transitioned into the use of five reels to make their games more modern.

Why Choose these Slots?

The diverse nature of Mazooma slots online for free play leaves punters with a lot to explore, so players can consider the following factors during the selection process:

The developer has a good number of slots to accommodate both low and high rollers. In some sets, stakes as low as a penny are allowed while in others a single spin can accommodate up to one thousand dollars.

The higher the number of play lines used, the better the chances of landing a winning combination.

The developer thrives in the online gaming scene due to a number of benefits that accompany its slots such as:

Mazooma online slots are developed with compatibility to mobile devices running on popular OS like Android and iOS. The sets can be launched in a no download mode.