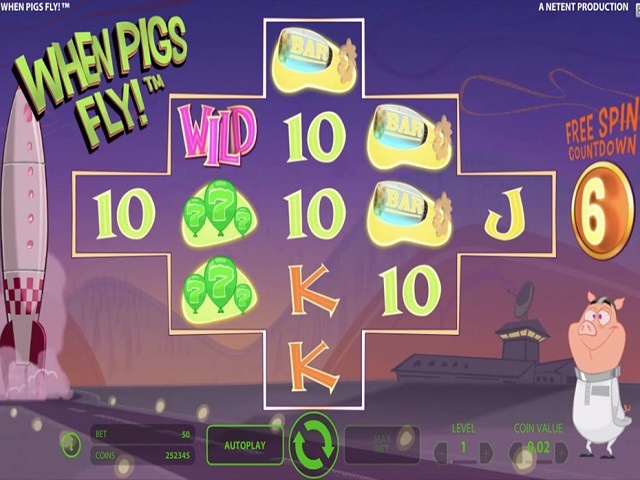 When Pigs Fly
(No Ratings Yet)

The slot we are looking at today is known as When Pigs Fly. An interesting name for an interesting game for sure! The set-up is a cross-shaped greed with great graphics and sound effects that will make you want to play more every single time you begin.

This casino slot has so many other great features that make it stand out among other games in casinos online. It was developed by the very popular NetEnt in 2016 and has been a super popular slot ever since. With 5 reels and 3,125 paylines, When Pigs Fly has grown to be very popular among its players. The big number of paylines means that a player has just as many chances to land themselves some real money. Each of the reels has several rows, and the reels change every now and then.

How the Game is Played

First and foremost, a player has to set his bet. They do this by clicking on the level button. This ranges from 1 to 10, and a player can win from whichever kind of bet they make. Just like in any other slot, when pigs fly also has different symbols featured. These include piglet astronaut, female pig in a hat, a bar, the card icons, ‘When pigs fly’ logo among others.

Some of the features to look out for include;

Dive into the Space Adventures!

Once you understand what is expected of you, the rules and tips of the game, then playing and actually landing the wins shouldn’t be so difficult. Mostly, once the bonus re-spins are triggered, the reels will change, hence giving the player yet another chance to land themselves a win. The best part of it all is the fact that you can hit as many re-spins as you can when in play.

The entertainment is therefore guaranteed in this particular title. Give this slot game a try today and enjoy all that it has got to offer. You just may never know, there could be jackpots!