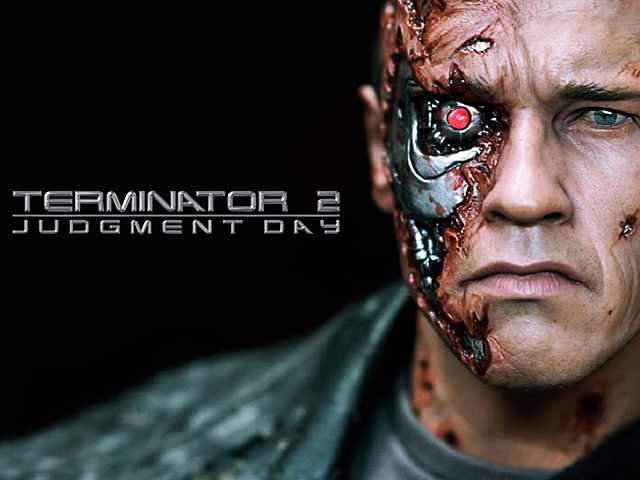 Terminator 2
(No Ratings Yet)

The Terminator film series by James Cameron is among the most successful science fiction franchises in the world of entertainment with sequels released to date. Microgaming holds the distribution rights for the film in casinos and does its take on the second movie in the series in the Terminator 2 Slot.

Terminator 2 online slot carries all the hard elements of the film and displays them on a five by three playing grid. The setting is crafted to resemble a machine, which is a representation of the mechanical nature of the film’s main characters. Dark blue light surrounds the screen with a few pops of colour coming with some of the icons that land on the grid.

The gameplay is conducted using the control bar, which resembles that of most other slots that fall in Microgaming’s portfolio. By pressing the Bet button, a small tab appears that allows the adjustment of the coin size from 0.01 to 0.1 credits. The number of coins used for each spin can also be changed from one to ten. The lowest wager value stands at 0.03 credits while the highest is one credit. Since the game uses two 243 ways to win in the place of bet lines, no line selection option is offered. Then, punters can proceed to use either the Spin or Autoplay buttons to start the game.

Terminator 2 Slot features characters that are mainly from the film to bring a sense of familiarity to the reels. Some of the symbols from the movie include:

Poker suites are included in the list of icons as well. The Bubble Tech, which is used in the time displacement venture is the scatter of the game while the logo is the wild and can be used on all symbols aside from the Bubble Tech and T-1000.

The list of winnings in Terminator 2 real money slot begins with the T-800, which pays between ten and 200 credits. Sarah Connor follows with wins of 12 to 300 credits, and the values are topped by those of T-1000 that pay 15 to 400 credits. John Connor offers impressive winnings of 20, 60, and 500 for the alignment of three, four, and five symbols, respectively. Terminator plays the jackpot symbol with 800 credits being granted for landing five of them on adjacent reels. 30 and 150 credits are paid for the appearance of three and four of the same. The poker suits hand out small wins of between 5 and 100 credits.

Terminator 2 Slot also does well on the bonus front, starting with free spins that are activated by the appearance of three to five Bubble Tech characters. For the ten rounds that are awarded, the number of win ways used rises to one thousand and twenty-four. This number is achieved with the addition of a sixth reel at the top of the grid. Also, the T-1000 adopts shape-shifting abilities that allow it to change into any symbol to offer the highest possible win. Players can win as much as eighty-eight thousand credits during the freebies round.

Terminator 2 Slot is termed as an impressive depiction of the film, which has allowed it to reflect the popular status of the movie in casinos online. This fame is also pushed by its inclusion of a 96.62% RTP rate.