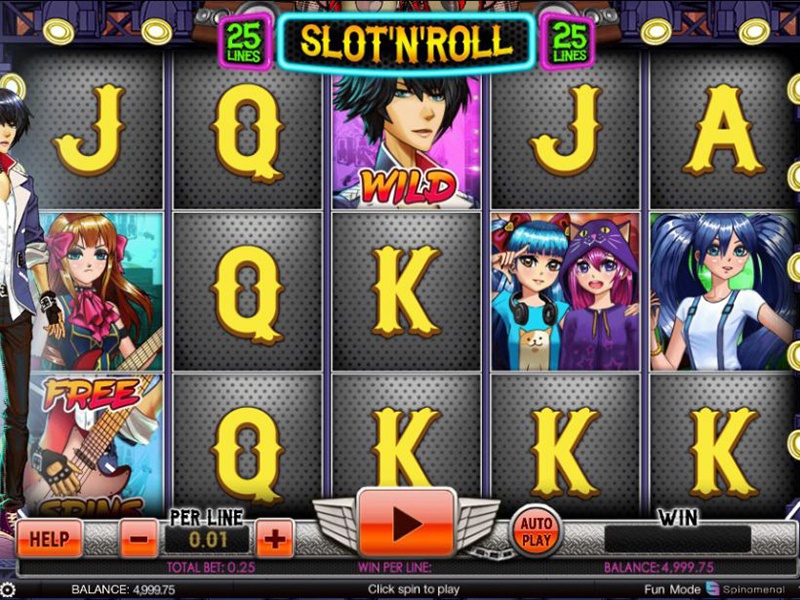 Slot N’ Roll is a phenomenal game from Spenominal. The game fuses two themes. Firstly, there is the anime theme, and secondly, there is the rock and roll theme. Both of these themes are depicted by the characters in the slot.

This slot game comes with five reels and 25 paylines. Note that Slot N’ Roll is a mobile-friendly game meaning that players can enjoy the game on their mobile devices.

To join the rock stars on the reels, players can opt for one of two modes. There is the free mode for those who are only looking for fun hence love playing the game for free.

There is also the real money mode for those who love playing for profits. When playing in the demo mode, players can alter the way in which the reels spin.

This feature initiates when the player lands at least three Scatters on the reels. The player in return receives 7 free spins.

During a spin, a heart icon may pop up on the reels. When it does, it transforms any of the standard symbols on the reels into Wild icons.

At random during a spin, 4 to 12 Wilds may pop up on the reels giving the player a big chance of landing a lucrative winning combo. A 3-symbol Wild combo pays the player a 250x multiplier applied to the current line bet.

At random during a spin, 1 to 5 stacked Wilds may appear on the wheels thereby magnifying the player’s chances of landing a lucrative winning combo.

At random, a girl icon may pop up on the reels. When it does, it transforms one or two symbols into sticky Wilds.

Slot N’ Roll is an entertaining casino game which comes with numerous bonus rounds which are fun to play. The RTP of this slot stands at 98.11 per cent.