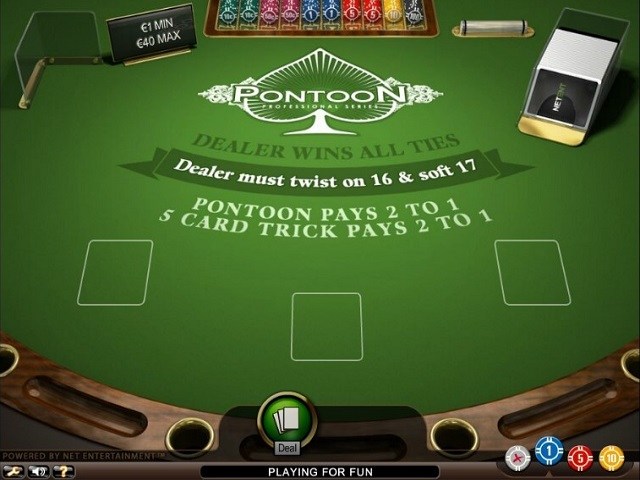 Pontoon Pro Series
(No Ratings Yet)

Pontoon Pro Series is a table game developed by NetEnt and is available in casinos online that the company supports. This slot is a variation of British Blackjack. Pontoon Pro Series differs with the standard blackjack in the pace at which it is played among other features that will be discussed in this review. This game requires prior knowledge on gameplay rules and strategies.

Terminologies used in Pontoon Pro Series differ slightly with those used in blackjack, and it is essential to understand those aspects before playing. Some of the terms that are different include:

Once adequate research on the game has been conducted, a gamer can then find online casinos that offer this variation of blackjack and start with the free mode to understand the game better before indulging.

Pontoon Pro Series borrows gameplay techniques heavily from standard blackjack, but it has significant variations that players should be well aware of before they start playing. In standard blackjack, gamers are allowed to stand on any hand irrespective of the value while in this variation, players are permitted to stick only on a value that is above fifteen. If a gamblers value is under fifteen, they have to twist.

Another major difference that sets the game apart from standard blackjack is the fact that players can double their bet by adding additional cards on their hand after a buy. Important to note is that, for all ties, the dealer wins. Any winning hand in this game pays even money. The Pontoon is an exception that pays in the ratio of two to one and the five card trick also pays the same rate. There are bonus features in the game that one will discover as they engage with it further. Progressive and non-progressive jackpots are not available for this game.

This game is among the best with smooth audiovisual elements brought together seamlessly to create it. The RTP for Pontoon Pro Series stands at 99.6%; hence, players have high chances at winning.