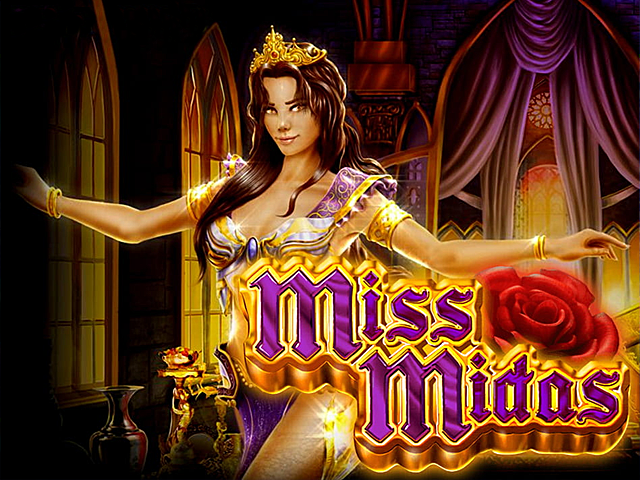 Miss Midas
(No Ratings Yet)

Remember the age-old story of King Midas, where everything he would touch would turn into gold. NextGen Gaming has brought this age-old folklore in a new avatar but with a twist in slot machine Miss Midas. It is a 5-reel slot machine that has a beautiful Miss Midas leading the players to all the glory and riches. It has 25 fixed paylines and an RTP of 96%.

The game can be enjoyed by the punters on a variety of devices, including smartphones and tablets running on Android, iOS, and Windows platforms.

How to Bet in the Game

Before she blesses you with her majestic gifts, Miss Midas wants the players to set their bets first. Instead of classical slot machine buttons, the game has used jewels to set the best.

The red and blue up and down arrow, which seem to be carved out of rubies and emerald, are used to increase and decrease the coin size in the range of 0.01 to 0.20. Once done with their bets, the players press the spin button to let the magic of Miss Midas begin. For longer gameplays, the autoplay button can be used by the gamblers.

Special Features Available in the Game

Miss Midas has got her magical powers from her father, and her kingdom is full of surprises for those who dare enter. The players come across wild, scatter, Super Bet Feature, Golden Touch, Gamble Feature, bonus, jackpots, and multiple free spins.

The lady of the kingdom, Miss Midas herself acts as the wild card in all her sizzling glory. She has the power to replace any other card to form a winning combination. She cannot replace the scatter, as it is her own palace. She appears only on reel 3 and can form her own winning combinations.

The feature can be activated by clicking the special super bet button. This results in additional and bigger rewards, at the cost of a bigger wager.

The magical feature is activated as soon as the players hit the wild. It turns adjacent symbols in gold, which later itself acts as the wild. Only the scatter does not get affected by this special power. The degree of this feature depends upon the game level.

The gamble feature becomes available as soon as the players hit a win. They are taken to a new screen where they have to guess the colour of the card. Upon guessing it successfully, their rewards get doubled.

However, they may lose their wins if they guess it wrong. Hence players are advised to use this attractive feature with some caution.

Activating free games feature award multiple free spins. By landing 3 or more castles, players can win up to 25 free spins. During free spins, the players see an increased activity of Miss Midas and her golden powers.

NextGen has tried to stay at the forefront of the game development industry. It has brought sharp twists to its stories and thus has presented incredible online casino machines. Its latest development, Miss Midas is a game that testifies the development brilliance of the company.

With medium variance and an RTP above 95%, it presents an excellent gambling choice to the players. It peaked on charts and gamblers are going to love every bit of action as they play for real money in casinos online.