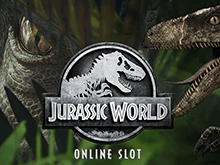 Jurassic World
(No Ratings Yet)

The Jurassic World trilogy is among the highest-ranking film franchises of the decade, and the first release in 2015 garnered so much success that it was delivered as a slot game by the revered Microgaming. The slot bears a similar storyline to the 2015 film it is built around, which is the tale of a fictional island functioning as a theme park for cloned dinosaurs.

Even though not as much action as in the film can be expected in the slot recreation, players are met with striking imagery that denotes the characters and settings on the island. The five reels of the set are placed on the glass of a fish tank where the mosasaurus was housed. The sheer blue waters of the tank match those of the reels, which are made in a sophisticated manner. Futuristic tunes play in the background, similar to those of the film.

Jurassic World gameplay begins with the selection of either the free or real money version of the game, with the latter demanding actual cash stakes. In either case, the procedure of play remains the same, which starts with the selection of a bet value between 0.3 and 7.2 credits. Since 243 ways to win are used to determine winning combinations, the choosing of lines is not necessary. When using the autoplay function, gamblers can activate as many as 100 consecutive spins.

Jurassic World wins are granted for the alignment of three to five items in three adjacent reels from the left end of the screen. The dinosaur emblems offer the lowest payouts while the movie characters lie on the higher end with winnings as follows:

Numerous bonuses are included in this casino slot as well, one of the most coveted being the Indominus Feature that awards as much as 200 times the placed stake. The mosquito symbol, which is the scatter, is used to trigger the free spins bonus that randomly awards one of three packages for the appearance of three to five of them. These packages are the Multiplier Trail, Rolling Reels, and Wild Scatters.

Jurassic World online casino slot may not be half as horrific as the film it is based on, but it does well on the entertainment front with an array of bonuses and accompanied by an RTP rate of 95.45%.