Epic Monopoly
(No Ratings Yet) 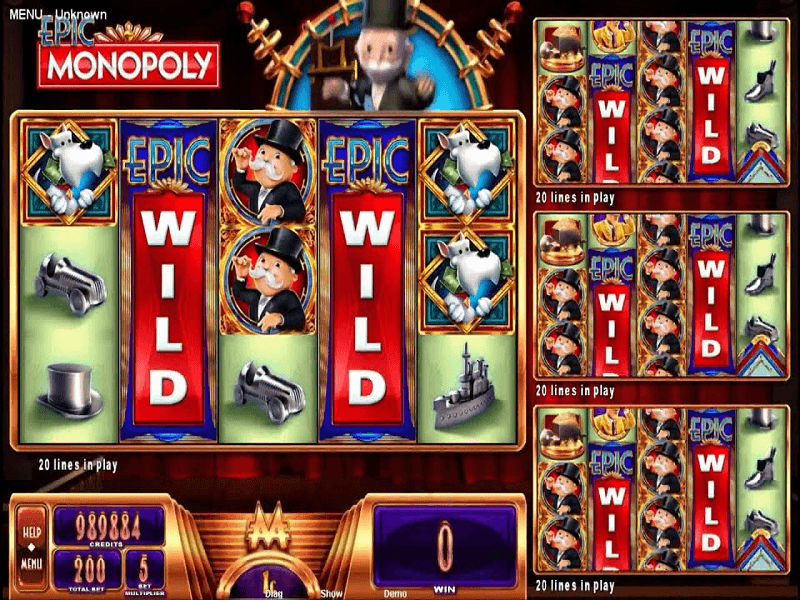 Few board games have enjoyed massive success on a global scale the way Monopoly has, which is why online casino software developers have taken the idea as well. Epic Monopoly lines up as one of the many slot machines based on the game, and it is a product of the popular online gaming company, Williams Interactive. The game developer maintains as many elements of the game as possible from the generic green shade of the board that adorns the main playing grid of five reels and three rows. A colossal grid is included as well with five reels, but this time, twelve rows are used in the place of three.

Monopoly demands the use of wits to navigate the board game, but little to no skill is required in this slot machine, with gameplay remaining rigid to the standard casino slot procedure. Punters are allowed stakes of between 0.01 and 1 credit, which is set using the bar that appears after pressing the brown arrow button placed at the bottom left of the screen. The whopping one hundred play lines used on both the main and colossal reel sets cannot be adjusted. When it comes to the spinning of reels, players can opt for the autoplay option, which offers as many as 25 consecutive rounds.

Epic Monopoly free slot takes a turn back to the board game that inspires its theme for the characters which appear on the reels. The monopoly board plays the bonus icon, and it only appears in the first, third, and fifth reel of both grids. The wild in the game is labelled Epic Wild, and can be used to replace all standard characters, which are:

The slot pays in the form of credit, with the jackpot prize of 5000 credits for the appearance of three bonus characters on both grids. Mr Monopoly is the highest paying of the standard symbols and provides 250 credits for a combination of five of them. This amount is a tie with that of five wilds.

The slot features an RTP rate of 96.01%, which places it on the higher scale of steady wins. However, no definite payout amount can be predicted.