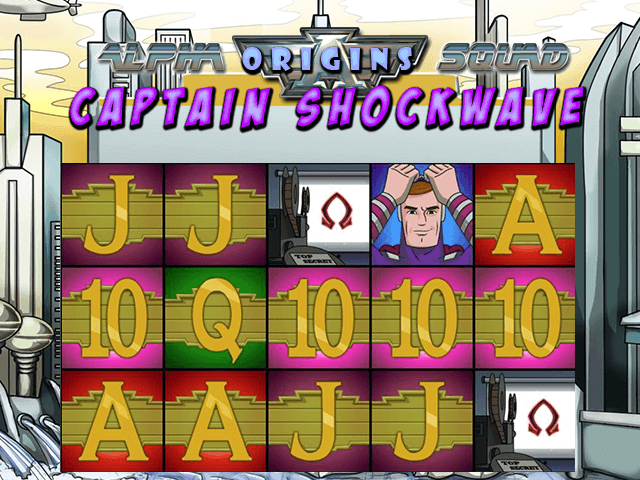 Alpha Squad Origins Captain Shockwave casino slot online showcases the story of superheroes trying to rescue their beloved city from villains. The setting is done on the background of a megacity with petty criminals engaging in heinous acts causing turbulence in the city. Genii, its developer, has crafted an appealing design through the colorful 3D graphics.

Most of its symbols are derived from the 1950’s retro comic books with a little humor incorporated. The reels are also set nicely against a reel with unique shades of grey in its background. As a gamer, utilize the Alpha Squad Origins, Captain Shockwave Slot, to showcase your strength and win the hearts of the city residents. Assist Captain Shockwave launch prime battles to defeat the Omega Syndicate to scoop great rewards.

Also, grab your headphones to enjoy the electronic sounds in this fast-paced slot with a superhero theme while gaming for fun or real money.

Several symbols in the slot will land you generous prizes. Like most Genii video slots, the Alpha Squad Origins Captain Shockwave Slot also has two scatter icons to trigger the free spins mode and increase the scatter combinations. Here are the game’s icons:

How to Win the Game

Target the wild and the superhero icons; they hold the highest prizes. But if you are seeking smaller wins, utilize the high-tech car and the spaceship icons. The scatter and the Sonar dog will help you to trigger free spins and additional 3x, 4x and 5x multipliers when you land five of them on your reels. Don’t miss out on the jackpot worth 8000.